I have only watched 2 movies in the past 2 weeks, and none at all this week ~shock~ ~horror~ ~people fainting in the aisles~ Mind you I have caught up on all my programs that I recorded from sky.  That would be way too many episodes of The Walking Dead, Victoria, Lucifer, Chicago Med . . . When you have to stitch you tend to watch way to much TV.  This is why I go to the gym and run, otherwise my butt would be the size of a 1969 Impala.

The 2 movies I did watch are:

Blair Witch (2016): Near Burkittsville, in the Black Hills Forest, on the root of a lightning-struck tree, the couple of Lane and Talia find a DV tape sticking out of the ground. The content of the found tape is mostly footage of static, however, near the end, there is also an intriguing small part where someone is trying to escape from something that is after him, screaming and running in an abandoned house. After accidentally stumbling across the uploaded footage, James, believing that this is his final chance to put an end once and for all in the unresolved mystery of his sister’s Heather disappearance, some twenty years ago in the same woods, he assembles a team of friends in search of answers. Sooner or later, the team will go astray in the heart of a green maze that is riddled with the chilling legend of Elly Kedward, the Blair Witch who relentlessly keeps messing with their sanity, gradually taking them down, one by one. Eventually, James will find himself in the epicentre of the evil activity, … Written by Nick Riganas

This was awful with a capital AWF.  They took the old story and basically made it again but totally forgot how to scare people while doing it.  I got bored and nearly fell asleep. 1/5 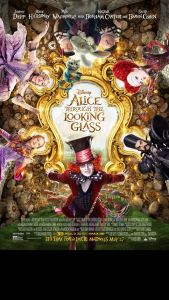 Alice Through the Looking Glass (2016): Alice returns to the magical world of Underland, only to find the Hatter in a horrible state. With the help of her friends, Alice must travel through time to save the Mad Hatter and Underland’s fate from the evil clutches of the Red Queen and a clock like creature, known as Time. Written by Ghostface

LOVED IT 😀 but then I really like weird and this definitely was weird 🙂 I love how many shapes Johnny Deep can twist himself into when acting 😀 If I hadn’t have seen it in my younger days I would swear that he can’t act straight. 4/5

Cooking was a little interesting.  I am attempting some vegan/vegetarian stuff. I adore animals and will one day probably own my own zoo. The older I get the more my conscious screams at me about eating animals.  I know it probably sounds silly but I value life, all life (except for a couple of notable exceptions), and its something that I struggle with.  I grew up and adulted farming for most of my life and I have seen cows cry when going to slaughter.  I just don’t believe that dumb animals are really all that dumb.  They love, sometimes problem solve and mourn, just like us.  Not having thumbs does not stop them from attempting to figure out how to open the gate latch.  In this day and age of abundance the need to eat meat with every meal is not necessary for survival so its time for me to see whether I can make it as a vegetarian, or mostly vegetarian (mmmmm bacon mmmmm chorizo I don’t know if I can give you up my tasty morsels of nomminess).  My husband is not impressed but he has been terrified of everything green since he was a wee tot so I am not surprised by this.  I have promised him that he can still have meat 😀 I promise not to become a reformed meater

So I did some research and got the Thug Life cookbooks.  All the swearing in the books makes me laugh while I cook 😀

Baked Spanish Rice is delicious and could be something we do more often.  The Smoked Maple Marinated Tofu was great but my husband won’t eat it.  That’s fine, he can BBQ himself a steak 😀

I don’t usually climb into political stuff.  The thing with political opinions is that everyone has them and won’t be budged.  However this came across my feed this week and had me rolling on the floor.  I think piss dongle might be my new favourite word.